The SteinsTech is an advanced technology industrial firm of European Alliance, led by Germany, most famous for its chrono technology based on Einstein's research. Its founder and leader is Siegfried[1].

During the Third Great War, a large number of Euro Alliance units equipped with SteinsTech research results, such as Thor Gunship played a huge role in fighting the Soviet invasion of Europe (more precisely, invading Britain). But SteinsTech also suffered huge losses when the Soviets began to attack Europe formally due to information on the communications base in northern Canada was leaked, and they lost four key research facilities in succession, including the most crucial laboratory and the Chronosphere, which were both destroyed by the Soviet MIDAS.

Fortunately, the Allies made a timely response and transmitted key personnel to the UK before the MIDAS explosion, and together with a small group of scientists from Kanegawa Industries who had escaped from Japan, decided to complete the preliminarily established joint venture project together with other K.I. personnel stationed abroad, to begin the development of the Allied Nations ultimate project: the Paradox Project.

After two years, the Paradox Project was almost completed. However, after the Allied London Fortress was hit hard by an elite Epsilon squad, the Paradox Engine had to take off in advance, and most of the Allies assembled in UK including SteinsTech and the KI personnel at Allied side have boarded the gargantuan flight fortress that designed by the two top research institutions together. Since then, the SteinsTech has started a new journey as the FutureTech.

As one of the Allied's primary tech provider, SteinsTech developed or participated in the development of the following technologies and units: 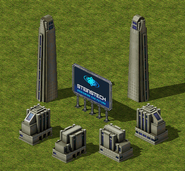