This page is not about the Rocket Launch Bay used by Russia.

Rocket Controller stats:
The Rocket Launchpad is a circular structure that contains all necessary and important equipment to launch and land a rocket, thus allowing it to secure its launching and landing phases to avoid any damage or complete destruction to its cargo/passengers. 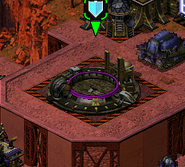 The landing pad seen in Yuri's fortress in Totoya Island