Due to the ravages of war, projects of Kanegawa Industries were often met with setbacks, sometimes indefinitely; the war even separated the Kanegawa Industries into two parties: the one overseas is keep affiliating with the Allies, and the other part staying in mainland are first controlled by China, then affiliated with the Foehn Revolt later.

When China's invasion in Japan had begun, Kanegawa Industries had already begun construction of Jackal Racer prototypes and research on particle collision weaponry (though inactive). Due to the successful occupation, Kanegawa Industries were forced to be cooperative with China as part of Japan's non-aggression pact with the former. The achievements of this coalition would remain unnoticed until the middle phase of the Mental Omega War, when Russia found and disturbed some new technologies that China relied on KI development by accident.

On the other side of the spectrum, several hidden KI scientists who were affiliated in the completion of the Paradox Project were evacuated by the Allies despite the Chinese occupation via chrono technology; they proved crucial in the development of advanced Allied technology, especially the Paradox Engine.

Furthermore, the KI scientists who were forced to work for China had started working together with Yunru to research technologies for use by a Chinese military division using unique equipment separate from the standardized Soviet arsenal. 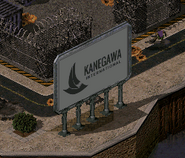 The Kanegawa International billboard that only appeared in version 3.3.5.